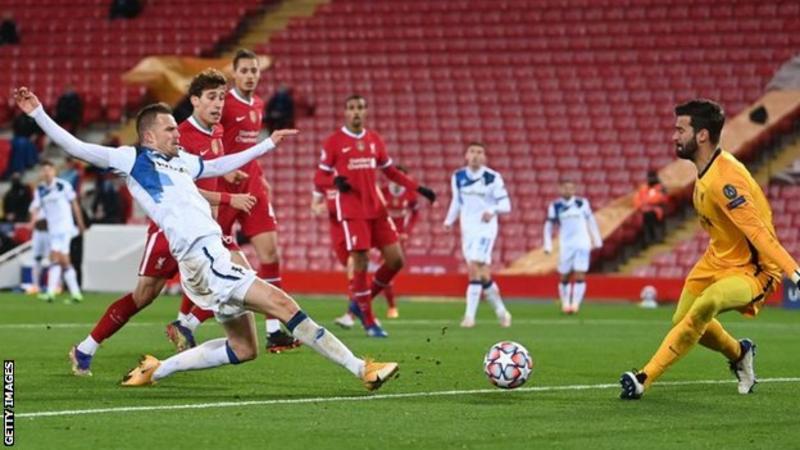 A much-changed Reds side lacked fluidity and failed to have a shot on target at Anfield on Wednesday.

Josip Ilicic and Robin Gosens struck for the Serie A side midway through the second half.

Mohamed Salah, returning to the side, had fired over with the Reds' best chance in the first half.

The Italian outfit looked more likely to break the deadlock and did so when Ilicic poked beyond Alisson from Alejandro Gomez's teasing
cross.

The visitors doubled their lead four minutes later when an unmarked Gosens volleyed in from Hans Hateboer's nod down.

Liverpool manager Jurgen Klopp immediately made four substitutions in a bid to get something from the game, but the changes could
not prevent the Reds suffering their first home defeat inside 90 minutes since September 2018.

Klopp's side still remain top of the group and need one win from their final two games - at home to Ajax and away to Midtjylland -
to qualify.

Lacklustre Reds suffer Anfield off night
Klopp will surely be disappointed not to have wrapped up his side's qualification for the knockout stages and given himself
the opportunity to rest players.

The German has already bemoaned the fact his team have to visit Brighton at 12:30 GMT on Saturday, urging broadcasters to discuss
the schedule or risk clubs losing players to injury.

It is also no secret the Reds are already without a number of first-team regulars, and with Curtis Jones, Rhys Williams and Neco
Williams in their line-up, Liverpool became the first side to start three British teenagers in a Champions League match for more
than a decade.

Gomez pulls Atalanta's strings
Atalanta impressed as underdogs on their Champions League debut last season, only missing out on a semi-final spot when Paris
St-Germain progressed in dramatic late fashion.

But the Bergamo outfit headed to Anfield without a win in all competitions this month, including that thrashing by Liverpool in Italy.

They looked a different side during Wednesday's victory, limiting the Reds to just three shots, none of which troubled goalkeeper
Pierluigi Gollini.

Users browsing this forum: No registered users and 5 guests